Industry 4.0 definition- is there a single one ?

The reality is that your requirements decide your Industry 4 definition, and there is no single one. Industry 4.0 is not an ABSOLUTE definition. It is the TREND towards automation and data exchange in manufacturing technologies and processes which include cyber-physical systems (CPS), IoT, and cloud computing, with software making a lot of decisions that humans used to make earlier.

At its most basic, Industry 4 is what you see in the picture below. It is:
– Data, direct from your machine, in a form that you understand.
– The software doing a lot of analysis of the data and taking decisions to help you.

There is a set of design principles that define Industry 4.0
Interoperability: The ability of machines, devices, sensors, and people to communicate with each other over the Internet.
Information transparency: The ability to capture activities of machines through electronic sensors, store this data, and process it for other purposes.
Technical assistance: First, the ability to support humans by reporting and alerting, so that humans can and take decisions. Second, the ability to support humans by performing tasks that are unpleasant, exhausting, or unsafe.
Decentralized decisions: The ability to make decisions and perform tasks as autonomously (independent of humans) as possible. Decisions and tasks are delegated to humans only if they are very difficult or involve conflicting goals. The extent to which each of these principles is implemented can vary, and will increase as years go by, as technology advances.

In sum, Industry 4.0 is any automation system in industry that is characterized by the capture, transfer and analysis of data using sensors connected to machines, the internet and cloud. It is a broad definition, and does not include any absolutes or measures like how much interoperability, how much technical assistance, etc.

Your specific Industry 4.0 definition will be based on:
– Your pain points
– Your budget
– Ability to make culture changes in your organization
– Benefits that you want to see

What Industry 4.0 is NOT

Does ‘Conforms to Industry 4.0 standard ’ have any meaning ? No.

The term is meaningless. There is no yardstick that you can use to say ‘This system conforms to the Industry 4.0 standard’. Industry 4.0 is merely a term used to denote a kind of automation characterized by the capture, transfer and analysis of data using sensors connected to machines, the internet and cloud.

There is no such thing as an Industry 4.0 standard. There are a lot of evolving standards for the different components of Industry 4.0 (sensor, Cloud, IOT, etc.) and the manner in which they communicate (the protocols, security, etc.), but there is no standard that says “This is Industry 4.0, while this is not”. If there is a system that follows the design principles enumerated above, it is Industry 4.0.

Industry 4.0 terms and buzzwords – the ‘need to know’, and ‘can throw in the dustbin’.

You’ll be bombarded with jargon by developers and sellers of Industry 4.0 systems, and financial gurus talking about how Industry 4.0 is going to ‘change our lives’.

Like any equipment, there are aspects of Industry 4.0 that are the domain of the developers of the equipment, and other aspects that are the domain of the users of the equipment (that’s you). In a CNC machine, for example, you need to know about accuracies, vibration levels, speeds, etc. – basically what the machine can do, not how it it does it. Why should you be burdened with the maths of complex tool path interpolation strategies or the functioning of individual chips on the controller board ? Strangely, discussions on Industry 4.0 are for some reason polluted with information that users need not know, and do not enough have information that they need to know.

What you NEED to know

Cloud
Computers and software in central locations, connected by high speed internet, instead of being within the organization. This post has more on it.

IOT (Internet of Things) and IIOT (Industrial Internet of Things)
IOT is the same old internet, used by things (devices) instead of people. IOT and IIOT are the same, but when IOT is used in industry, it is called IIOT. Just another acronym adding to the confusion. This post has more on it.

IT infrastructure
IT equipment that you need on your shopfloor to implement the Industry 4.0 system. LAN (wired/WiFi) in shop floor, Server (with A/C, physical security, backups, UPS), IT maintenance team, recurring IT maintenance cost. This post has more on it.

Digitalization
Just another word for Industry 4.0.
Digitalization is moving towards computerization of your organization’s data collection, analysis, and reporting to improve efficiency and profits. Most organizations will already have this to a substantial extent outside the shop floor, in the office. The new use of this term is on the shop floor.
Note that Digitization is different from Digitalization. This is the conversion of analog data to digital. E.g., converting your old printed part drawings into CAD format.

What you NEED NOT know, that are the software developer’s problem

Cyber physical system
A collective term that refers to the machine plus sensor. This post has more on it.

Analytics
Accessing and analysis (computation, filtering, sorting, etc,) of data followed by reporting or alerting to people or communicating to other software. The data could be collected from machines, people, and other software.

Artificial Intelligence (AI)
This is ‘intelligence’ demonstrated by machines, unlike the natural intelligence displayed by humans and animals. Any logic that enables a machine or device to perceive its environment and take actions to achieve a goal. The thing about AI is that ‘Yesterday’s AI is today’s normal software;. Vision inspection, human speech recognition, etc. that were considered AI a few years ago are just routine software now.

Machine Learning (ML)
The science of getting computers to learn and do something themselves without being actually programmed to do it. Like humans learning from experience. The software improves its decision making capability on its own, without being initially being programmed that way. Example: “Ok, when the vibrations reached this level, I informed the humans and they asked me to reduce the RPM to 500. Next time I’ll do it myself”. ML is a means of achieving AI.

What you NEED NOT know, UNLESS they are part of your operation

Robotics
Robots are NOT a necessary part of Industry 4.0. Industry 4.0 implementation in your organization does not require robots.

High Automation levels
You could have a whole lot of manually operated machines. All your material handling could be manual, and every single part of yours could involve manual intervention. High automation, is NOT a necessary part of Industry 4.0. Industry 4.0 implementation in your organization does not require this.

Virtual Reality (VR)
Virtual Reality is a 3-D environment that is generated by a computer, which can be explored and interacted with by a person. E.g., you can learn about a machine with just a fully simulated machine and no physical machine.

Augmented Reality (AR)
Augmented Reality overlays digital information onto a physical world. E.g., you point your mobile phone camera at a machine part, the software recognizes what part it is, and gives you detailed information about the part for machine operation or maintenance.

Industry 4.0 is merely a term used to denote a kind of automation characterized by the capture, transfer and analysis of data using sensors connected to machines, the internet and cloud.
Please use the rules above to filter out the redundant and Industry 4.0 terms and Industry 4.0 buzzwords from your conversations with vendors and consultants, and make your discussions meaningful.

The beautiful Old City of Ahmedabad

The Old city part of Ahmedabad is 600 years old, built by Ahmad Shah I (after whom the city itself is named). It is roughly square, about 3 km x 3 km. It had a fortified wall all around to protect against invaders, with 21 large gates. The gates still exist though the (presumably) wooden shutters don’t.

Amazingly, the city has survived almost unchanged since it was built. It is a collection of around 360 Pols, or residential colonies. Each Pol in turn had a gate for its protection, and homes were closely packed so people could actually move between homes on the roof top – must have been a nightmare for attackers. If town planning focused so much on defences, it makes one wonder how much time rulers of various kingdoms spent attacking each other versus sitting around and relaxing (or maybe it’s because they didn’t have TV and potato chips then, and didn’t know what to do with their time).

The houses in the Pols used a lot of wood in the construction, much of it crumbling now of course. In keeping with the architecture of those days, form is as important as function in the architecture here, and there’s art in the most unlikely places and structures. Each Pol also has a little square for people to hang around in, around a Chabutro or bird feeder.

The narrow streets in the Pols do not allow movement of cars, and barely allow scooters and bikes. The Pols are therefore cozy, peaceful places with children playing in the streets and cows lazing around.

The Old City is now a UNESCO Heritage City, and hence seeing a lot of revival and reconstruction. 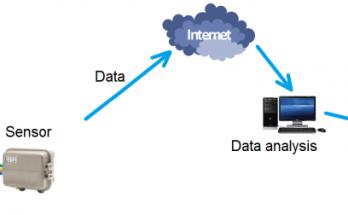 What is Industry 4.0 ? A simple explanation