Your OEE improvement strategy needs a method of tracking downtime, rejections and cycle times 24/7. OEE, or Overall Equipment Effectiveness, is a brilliant invention that, in a single number, tells you how much waste there is on your shop floor. It is merely the ratio of what you produced to what you could have produced – the actual output to the theoretical maximum capacity. It is a direct measure of your profitability and return on investment. OEE improvement directly translates to profitability improvement.

Notice how fast we go from “Ah, those are great numbers for A, P and Q” to “Oh man, this OEE kind of sucks” ? This number means that only 63 % of the available capacity is being used, and there’s a 37 % wastage. That’s awful, but it’s way better than the number in an average shop floor. In terms of return on investment, 63 % OEE is like paying for a banana, and getting only 2/3 of it.

You cannot improve your OEE unless you continuously measure and track it and its components A, P and Q. Your OEE improvement strategy must include a machine monitoring system that automatically tracks production, machine downtime and rejections.

‘Mix’ on the Deccan Queen

On the Deccan Queen (lovely name for a train, isn’t it ?) from Pune to Mumbai recently, I had a new food experience. The train has a nice dining car, something that I haven’t come across in any train in India. There’s also an attached kitchen where everything is cooked fresh, instead of cold food being loaded from a wayside station.

Mix (sorry, the pic. was taken when the train shook rather violently – note the ripples on the surface) After a breakfast of Sabudana vada, I heard someone ordering something called ‘Mix’, was intrigued and asked the waiter what it was. It turned out to be a mix of coffee and tea, and since I have a mental problem that makes me any order any food that is new and unusual, I ordered the Mix instead of one of the two beverages separately. I was given a cup of coffee with a tea bag sitting in it, and the taste was (obviously) a hybrid. I thought it was interesting but not great, although my fellow travellers in the dining car seemed to be quite addicted to it.

An occupational hazard of being a ‘eat anything that looks new and interesting’ guy is that I sometimes end up with truly ghastly tasting stuff. This experience thankfully wasn’t one of those.

Calculation of OEE – bad idea to cook up numbers 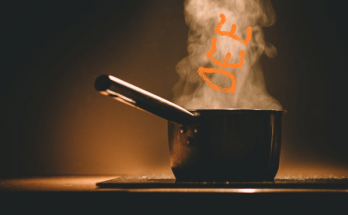