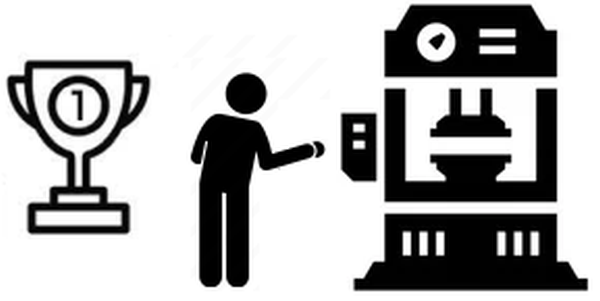 A firm started paying operators salaries and incentives based on actual production data from a production monitoring system. Their performance and factory efficiency improved dramatically.

About the LEANworx user
Automobile parts manufacturer with 130 machines connected to LEANworx. Machines are CNC lathes and machining centers.

Before LEANworx
Operators were being paid fixed salaries irrespective of their actual production or efficiency of production. There was no accurate production tracking. Production quantity and downtimes were written into a register by the operator, and were mostly wrongly reported. Use of Feedrate override was common, with over-production in the shifts and under-production in night shifts. Operators with high skill and motivation take less time for setup and part unload-load, than operators with low skill and motivation. Both were however being paid the same wages. Good operators felt unrewarded, and bad operators were not being penalised. Overall, factory efficiency was being impacted badly.

How did the transformation happen ?
After LEANworx production monitoring system was installed, production and downtime tracking is automatically done 24/7.  Production quantity and downtime tracking is accurate, directly from the machine’s electronics. LEANworx has a separate operator efficiency report that is used by the HR department to pay operators’ salaries and incentives.

Here are some of the reports in LEANworx production monitoring system, that the firm used to achieve the transformation.

The firm and machine names have been changed to protect the identity of the firm.